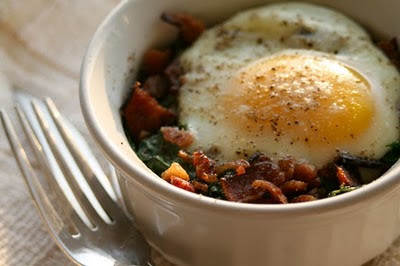 Oh dear lord... you NEED to try this recipe - especially if you're like me and can't resist anything with an egg perched happily on top.  This recipe is amazingly simple, as is illustrated by it being in Bon Appétit's Fast, Easy, Fresh section of the September 2010 issue.

This is one recipe that I followed without straying (an unusual feat of discipline for me), except for the fact that I cut the recipe in half to make two servings instead of four.  I was worried that one little ramekin wouldn't be filling enough, but I thought it was a perfect serving, especially with a quick salad of local cherry tomatoes tossed with olive oil, salt and pepper, served before the eggs came out of the oven.  Although, hungry eaters and/or teenage boys may disagree... in that case I'd serve two per person with a heartier side - mmm, homefries anyone?

I used Vermont Smoke & Cure bacon (my go-to... it's worth a dollar or two more), which is mainly maple smoked... which I prefer to applewood smoking.  Vegetarians could swap out the bacon for  smoked gouda or mozzarella, or even a smoked cheddar - just sprinkle a handful between the egg and the spinach where the bacon would normally go.  To be honest, I'm not hugely a fan of cooked spinach, so I shortened the cooking time of that step to a mere 20 seconds - it finished beautifully in the oven without becoming slimy.

I won't post the recipe here, Bon Appétit deserves 100% credit for this one.  Check it out on Bon Appétit's Website.
Posted by Kelci at 8:01 PM