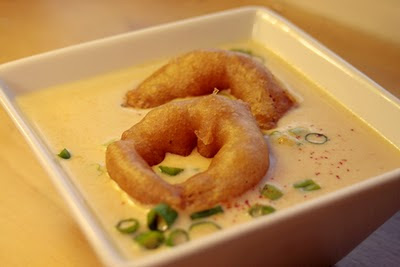 I've been formulating this recipe for weeks... I had perfected it.  A rich, creamy cheddar ale soup made with Rogue Brewery's Chipotle Ale for a well-rounded touch of heat.  It would be the crowning glory of my blog; I would never need to write another recipe again.  Foodies world-wide would stand in awe of this recipe, proclaiming it the most delicious cheddar soup in all of history.  This recipe was perfect.

It was perfect, that is, until I was standing in front of the craft-brewery refrigerator at a local store, staring vacantly at the neat rows of bottles.  Something was missing.  Where was my beloved Chipotle Ale?  Had I angered the gods?  Why wasn't it there?  What would I do?  How could I go on?  Still in a state of shock and dismay, I analyzed my choices and picked Rogue's Dead Guy Ale.  With the rest of my concept still firmly in place, maybe I'd end up with the second-cousin to the greatest recipe in the world.

I should mention that this recipe is near-perfect due in part to the fact that this is not a dieters' recipe.  Dieters, it's probably best if you stop reading now.  This cheddar ale soup is not shy with the heavy cream, and blatantly unashamed of its cheddar-y roots.  The ale probably contributes a few additional calories, too.  That being said, if you aren't afraid of a splurge then a small bowl of this goes a long way.  In fact, I don't think I'll be eating again until lunch tomorrow.

This soup came together in a flash, and disappeared just as quickly.  Since we had a little beer left over, we decided to make a few beer-battered onion rings to top off the meal.  Was it perfect?  Speaking for myself, I thought it came pretty close.

P.S. Vermonters, don't get all up-in-arms that I didn't use a Vermont beer.  Assuming that I can't find Chipotle Ale, I'll probably go local next time.  There are a lot of options, but here's a few suggestions:
Long Trail - Would be delicious in this soup.
Switchback - Delicious if you happen to have a keg on tap like we do.  Lighter in flavor, this would be a good choice if you're timid about using a bolder brew.
Magic Hat - I thought #9 might be a little odd due to its apricot notes, but I'd consider using Single Chair Ale, or maybe Encore.

In stock pot over medium heat, melt butter.  Once butter is foaming, add flour gradually to make a roux, whisking to remove lumps.  Once the roux is blonde in color, slowly pour in ale, continuing to whisk to thoroughly incorporate. (Note: Avoid standing directly over stock-pot while adding ale, due to the alcohol cooking off.)  Once ale is added and the mixture has no lumps, add the vegetable stock, cream, and milk, continuing to stir.

Place peppercorns in a cheesecloth bundle tied with twine (or into a tea ball) and place into soup.  Stir in mustard powder and garlic.  Lower heat to medium-low.  Working one handful at a time, whisk in mild and sharp cheddars, whisking in each handful thoroughly before adding the next.  After all cheese has been added, add cayenne.  Taste and season as needed with salt.

Serve immediately, topped with scallions, an additional dash of cayenne, and/or beer-battered onion rings (recipe below).

Preheat fryer oil to 375 degrees.  Slice the sweet onion into 1/2" slices, and separate the rings within the slices into individual rings.  Toss the rings with 2 T. flour to coat lightly.

Combine the ale, seltzer, and flour, whisking to remove any lumps.  Working a few at a time, coat the lightly-floured onion rings in the beer batter.  Gently shake the rings to remove any excess batter, and fry until golden in color, about 2 minutes.  Season with salt immediately upon removal from fryer.