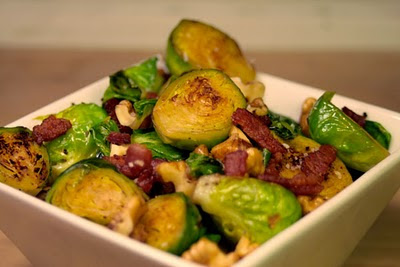 The Brussels sprout gets a bad rap.  I personally was never forced to eat them as a child, but I've heard horror stories of grayish-green sprouts boiled to the point of no return... complete with the "old gym sock" smell.  Luckily, I think I've crafted a recipe that is a far cry from the sprouts of so many people's nightmares.

Brussels sprouts get their name from the eponymous city in Belgium that is credited with their cultivation, which is why you won't see me calling them "brussel" sprouts. It's "Brussels," proper capitalization and all.  They have a reputation for being bitter, but that bitterness can actually play well with other well-balanced flavors, particularly acidity.  I like to up the flavor ante with the smoky flavors of bacon and whiskey - the whiskey also lends a slight sweetness.  Mix in a few crushed walnuts and I promise you that you'll have a new favorite vegetable.

Cutting small Brussels sprouts in half allows them to cook quicker, and they are more manageable on the plate.  For larger sprouts, I prefer to quarter them.  This also allows for more surface area to come in contact with the skillet, meaning a greater opportunity for caramelization to form, which creates a light etherial crispness that contrasts nicely with the tender inner leaves of the sprout.

I implore you to cast aside your prejudices and give the modest Brussels sprout another try.  Hopefully you will be pleasantly surprised.


Whiskey-Glazed Brussels Sprouts
Serves 4-6 as a side dish

Heat a large skillet over medium heat.  Once heated, cook the bacon until crispy.  Remove bacon and all but 1 T. of the bacon drippings.  Add the sprouts into the skillet with the remaining bacon drippings, along with 1/4 c. water.  Let cook over medium heat, stirring occasionally, until the water has mostly evaporated.  Remove the skillet from the burner and add in the apple cider vinegar and whiskey, and give the sprouts a stir.  Return the skillet to the burner and cook for 2-3 minutes, until most of the liquid has evaporated and the sprouts are beginning to caramelize. Turn off the heat, and mix in cooked bacon and walnuts.  Serve immediately.
Posted by Kelci at 12:51 PM