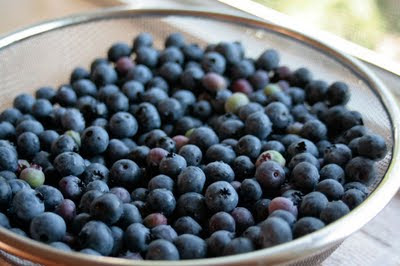 A couple of weeks ago my husband and I were standing in line at Mad Hatter deli in Burlington and talking to the owner about the ridiculous costs of blueberries at the Burlington Farmer's Market.  The owner mentioned that he took his family to pick their own blueberries the previous weekend, and I let it slip that I'd never gone blueberry picking.  And hence, we decided that it was long overdue.

It's not as though I've avoided going berry picking, but it wasn't one of those common summer activities in the homes of my childhood (northern Texas and central Illinois).  I actually think it's a great idea: pick the berries you want - I like the smaller, more tart ones - and save a few bucks in the process by doing some of the farmers' work.  So we made it out to Pelkey's U-Pick Berries over in Charlotte, VT, and picked away.


Our total haul was a bit over 2 lbs, for which we paid a bit over $10.  After freezing some and eating some fresh, I decided a fresh blueberry vodka infusion would really round out the mix.  I've been on a bit of an infusion kick this summer, infusing vodkas with basil, cucumber, kiwi (the kiwi was not as tasty as I would have hoped), and watermelon.  Some worked better than others, although I can say without hesitation that the blueberry has been my favorite so far.
For those of you who are new to infusing, it basically goes like this:  Take your well-washed flavor of choice, combine with vodka or another liquor, seal it up tightly, and throw it in the refrigerator.  Keep it there for 1-2 weeks, shaking gently every day or two, and then consume.  I know fellow infusion lovers who infuse at room temperature and/or keep their infusions blending for longer; but I'm a little paranoid and generally don't like to keep fresh produce around for that long (regardless of the preservative effects that vodka seems to possess).  Plus, a good infusion is just so darn tasty that it goes quickly at gatherings with friends. 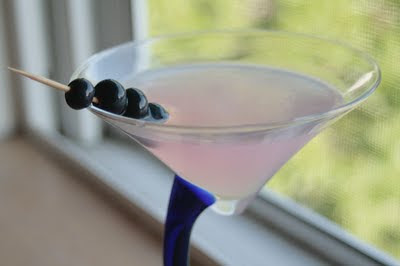 One of my favorite ways to use blueberry vodka is to make a blueberry lemonade martini.  It's super simple, ultra refreshing, and it looks pretty too, which is a bonus for the eat-with-your-eyes crowd.  The recipe can also be poured up over ice and topped with seltzer or iced tea for a bit more thirst quenching power.
Blueberry Vodka
Makes 2 cups
Click here for printable recipes
2/3 c. blueberries, rinsed well
2 c. vodka (Note: Top shelf quality isn't necessary, but a good middle-of-the-line vodka is worth the expense)
1 clean glass jar with airtight lid, or bottle with stopper
Combine the blueberries with the vodka.  Tightly seal, and place in your refrigerator.  Gently shake every 1-2 days, and serve after 1-2 weeks.  To serve, pour the vodka, being careful to leave the blueberries in the bottle.  Blueberries can be discarded after the bottle is empty.
Blueberry Lemonade Martini
Makes 1, easily multiplied
2 oz. blueberry vodka
2 oz. homemade lemonade (check out the Simply Recipes blog for a great formula)
4-5 fresh blueberries for serving
Fill a martini glass with ice, and then top with water until very full, in order to chill the glass.  Add 1 cup of ice to a cocktail shaker, then add blueberry vodka and lemonade.  Shake very well - if you're using a metal shaker, a thin frost should appear.  Empty the water and ice from the chilled martini glass, and pour the beverage into it.  Garnish with blueberries on a cocktail stirrer, or let them sink to the bottom of the glass.
Posted by Kelci at 6:20 PM