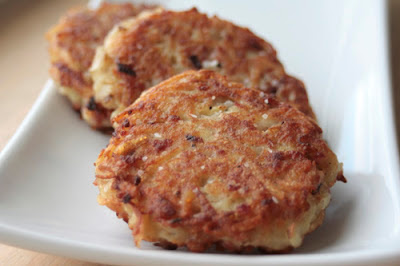 After making an old-school, southern inspired recipe of ham, cream cheese, and red pepper jelly canapes for a midweek potluck (I used phyllo shells instead of water crackers), I had a considerable amount of chopped ham left over.  I would usually default to making a big batch of ham salad, but I wasn't in the mood.  Not wanting to be wasteful, I devised these tasty little latke-like potato pancakes for breakfast that weekend.

These came together in a flash, and were a nice addition to a batch of scrambled eggs - although in all honesty I wish I would have cooked the eggs over-medium, so I could run forkfuls of potato-ey goodness through the runny yolk.  Guess I'll know better for next time!

I'm thinking you could probably substitute the ham with other finely chopped leftovers; broccoli seems like it might be especially delicious, especially with a dab of dijon mustard stirred into the mix.  Or perhaps mix a bit of grated zucchini in with the potatoes?  I'd love to hear what other people mix in, so let me know.

Using a large/coarse grater, grate the potatoes into a mesh sieve over a large bowl.  The potatoes contain a lot of extra liquid - Once grated, push down on the potatoes using your hands to squeeze some of it out (potatoes do not have to be totally dry - this step just helps the mixture come together a bit better).

Discard the liquid that was squeezed out and transfer the potatoes to the bowl.  Mix in the onion and the chopped ham, and toss well to ensure everything is thoroughly mixed.  Add the egg and stir it in until well incorporated.  Add the thyme, a small pinch each of salt and pepper, and 1/3 cup of flour and mix well.  If you can shape a small handful of the mixture into a ball and it doesn't fall apart, you don't need to add any more flour.  If it seems too loose to stay together, try adding a bit more flour a tablespoon at a time until it holds together.

Add enough oil to a 10-inch skillet to cover the bottom by about a 1/4 inch.  Heat over medium.  When oil is hot (test it by dropping a small piece of your potato mixture in - it should bubble and turn golden within 15 seconds), loosely shape your mixture into 1 1/2 inch balls.  Working in batches, drop each ball into the oil and  gently flatten them with the back of a spatula.  Fry for about 2 minutes on each side, and then transfer to a plate lined with a paper towel.  Season with a sprinkle of salt soon after removing them from the oil.

Serve immediately - these are delicious served plain or with a dollop of sour cream.
Posted by Kelci at 10:13 AM