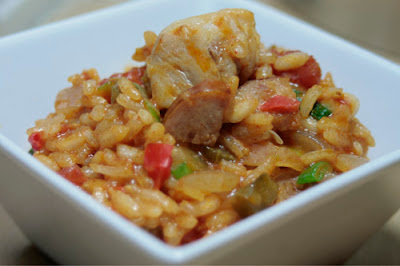 Mardi Gras is upon us!  For me, it's mainly an excuse to make gumbo, king cake, or another New Orleans specialty  This year, I thought I'd try making a jambalaya-flavored risotto.  Fragrant with bell peppers, celery, and onion (the cajun variation on mirepoix), spices, chicken, and smoky sausage, it's a satisfying one-skillet meal.  A side note:  A lot of recipes also call for shrimp or crawfish, but I kept this recipe simple.

Add the onion, bell peppers, celery, and garlic, along with a pinch each of salt and pepper, to the skillet.  Cook until just translucent, and then transfer from the skillet into a bowl or plate.

Add 1 T. butter to the skillet.  When foaming, add the arborio rice and cook until it smells like it's beginning to toast and is barely turning light golden.  Add 1 c. of the chicken stock and lower heat to medium low.  Stir in paprika and cayenne, along with a small dash of salt.  Stir frequently until the liquid is absorbed.  Continue adding stock 1 cup at a time and stirring continuously until the rice is almost cooked through and mixture has a creamy consistency.

Add the can of tomatoes and chiles along with its juices, along with the onion/bell pepper/celery mixture, and chicken and sausage.  Continue cooking over medium heat until rice is tender with just a bit of bite left to it.  Remove from the heat and stir in the remaining 1 T. butter and scallions.  Once butter has melted, serve immediately.
Posted by Kelci at 7:31 PM