One Skillet Chicken and Parmesan Pasta 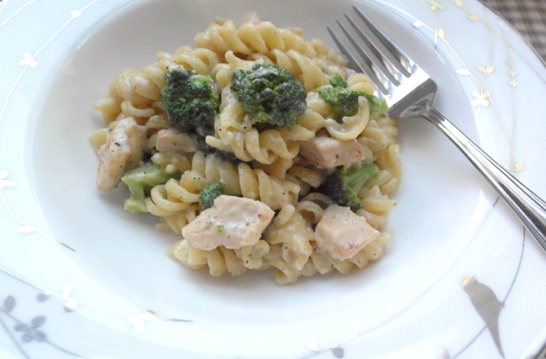 Oh, Monday.  Every weekend, I know you'll greet me after Sunday bids adieu, but in my 30 years on this earth I still haven't gotten the hang of you.  Dragging myself out of bed bleary-eyed and one snooze button too many, I struggle to get through the day because I just couldn't convince myself to let Sunday go and just.go.to.bed.already.  Luckily, at the end of the day I can turn to a super-simple, comforting pasta like this one to soothe my Monday blues. 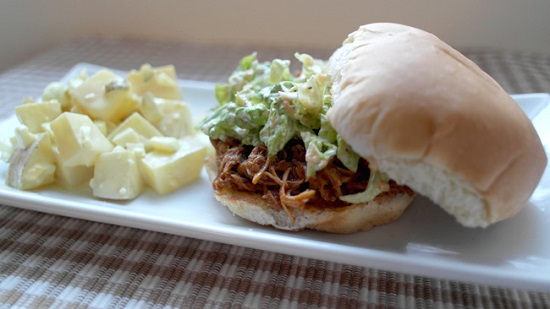 You guys. O. M. G. I've been writing (sporadically, I'll admit) this blog for over five years, and it didn't dawn on me until Labor Day weekend.  Somehow, by some freak accident, I've never posted my recipe for slow cooker pulled pork.  This is huge, but perhaps fortuitous, since my recipe has evolved ever-so-slightly over the years.  About 6 or so years ago, I took my pulled pork to a work potluck, and I soon regretted it.  It became "THE dish" that people expected me to bring to potlucks:  Nice, because I'm glad people love it so much.  Not so nice because I was still somewhat young in my career and sometimes it's just so much cheaper to bring a cobbler (which, thanks to Pinterest, is the most popular recipe on the site). 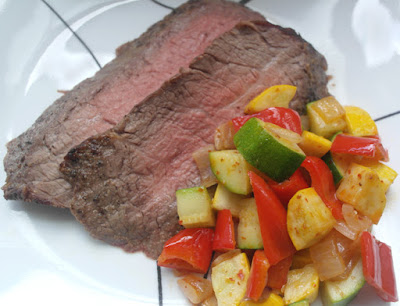 I've been thinking about the recipes I post to the blog lately, and more importantly, the ones that I don't.  This is one of the ones that rarely ever would see the light of day.  Why?  It's too simple.  It's more of a method than a recipe.  It only takes 20 minutes, so who would care?  Wait - I might have something there.  This meal comes together in about 20 minutes, and it's a go-to for weeknights when The Husband and I are exhausted from work but don't want to order pizza.  It may not be the "sexiest" recipe ever, but it's quick, delicious, and when cooking for two, means leftover steak for sandwiches. (Do I hear a French dip calling my name?  Yes.  Yes I do.) 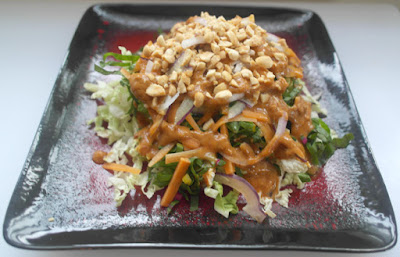 My CSA share this past week included the BIGGEST Napa cabbage I've ever seen.  And so commenced the week of the slaws.  (Which was actually fairly refreshing since we've had a heat wave hit over the past week - anything that doesn't involve cooking is a win in my book!)  The slaw ingredients are a mashup of whatever I've got in the crisper drawer - in addition to cabbage, I've been adding carrot, super thinly sliced onion - scallions would be good if you have them - bell pepper, and finely sliced Swiss chard.  But these sauces - dear lord, these sauces.  Sauce A:  A classic peanut-sesame sauce, with a little bit of heat.  Sauce B:  A spicy, gingery red curry coconut sauce.  I originally made them to use separately, but The Husband suggested they might be good together... and I'm so glad I tried it.  They're delicious on their own, but a revelation together. 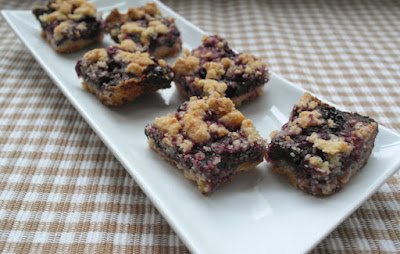 Blueberry season is upon us, my friends!  The husband and I have made an annual tradition of heading to a nearby berry farm and picking tons of a large, tart variety.  After thoroughly gorging ourselves, we freeze several quart bags of them to keep on hand for the rest of the year.  I made these bars a few weeks back with the last lingering frozen berries on hand, hoping that the berry farm would open soon. 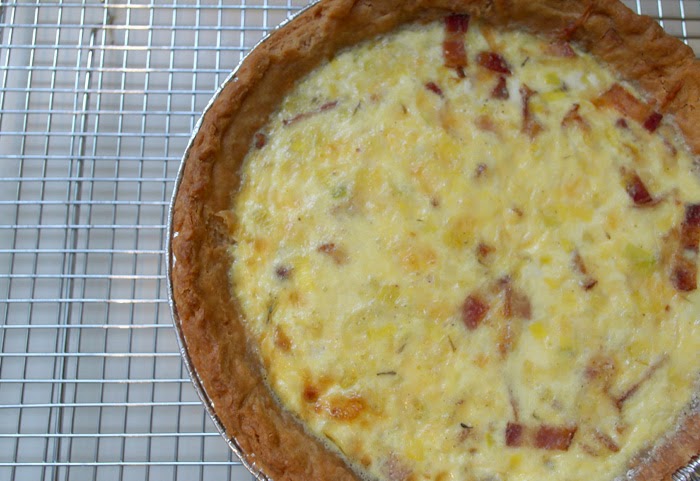 I LOVE quiche.  Out of any brunch dish, savory or sweet, if there's a quiche around that's what you'll find on my plate.  And so when my spring CSA delivered me a bounty of leeks, I knew it was time to make the most perfect of all quiches, chock-full of leeks, bacon, and cheese in a light eggy custard.  Oh yes, I'm so there. 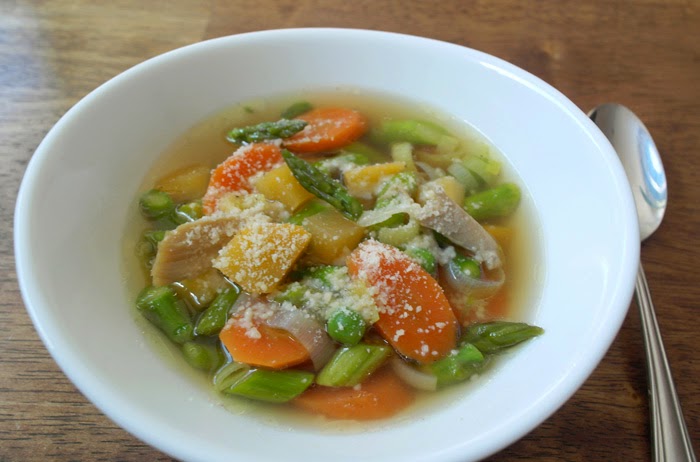 It's Saturday, it's sunny, and the snow has melted away.  Dare I say it, I think winter has finally - FINALLY - released us from her cruel, icy grip.  While the majority of items in my weekly CSA share are still root vegetables, I thought I'd be slightly less locavore and spring (hah! a seasonal pun!) for some lovely thin asparagus spears at the market. 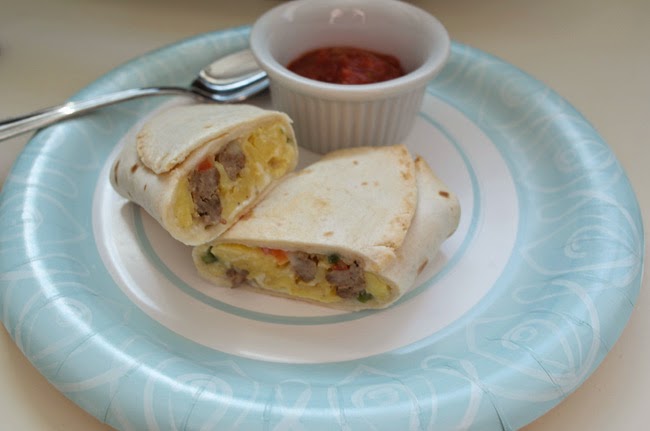 I have a serious love of breakfast burritos.  No matter the ingredients, if there's a breakfast burrito on the menu there's a serious chance that will be what I order.  But they're also super easy to make at home, and this version is freezer-friendly to boot.  On a weekend, I'll make up a dozen so that we have them on hand at a moment's notice.  This basic version, I will admit, is my take on (gasp!) McDonald's breakfast burritos.  (It's one of the only things you'll ever see me eat from McD's.) 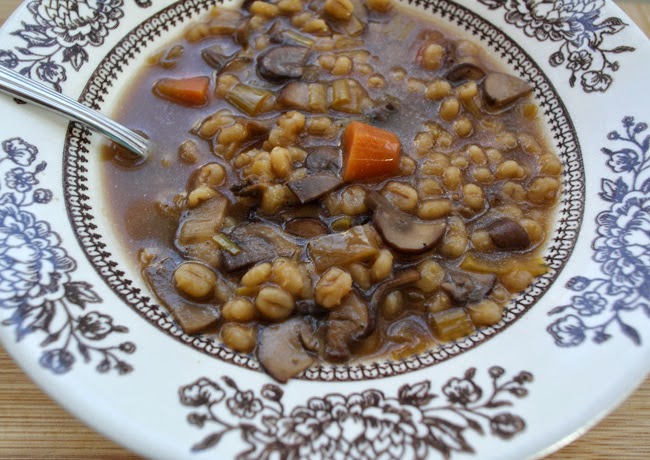 Guys, sometimes I get cravings.  (And I don't understand why the word "craving" for women in my age bracket automatically implies pregnancy.  I'm pretty sure non-pregnant women - and men! - also have intense desires for certain foods.  But "craving" is so much easier to say, so lets drop it for now.)  The other day I decided I wanted, nay craved, beef and barley soup.