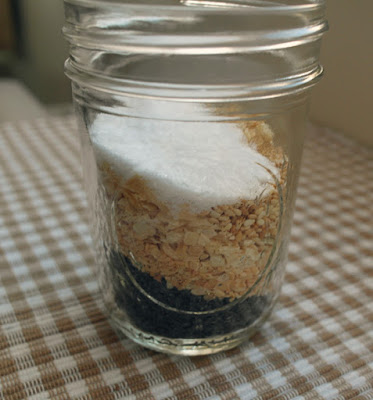 I have a serious love of everything bagels.  Something about the mix of nutty sesame seeds, slightly floral poppy seeds, and the potent kick of garlic and onion just seems to make everything taste better.  And I'm strongly of the opinion that everything bagels should also have sea salt in the mix; those without it are far inferior.  The problem?  For me, eating an everything bagel everyday would result in me growing a spare bagel around my middle, if you know what I'm saying.  Luckily, I found a way to "everything" everything!

I'm strongly in favor of simple recipes/formulas that don't call for specific measurements.  Want to make a trial batch?  Replace the word "part" with "teaspoon" and call it a day.  Want to "everything" the entire world?  Replace "part" with "cup" and you'll have a lifetime supply of seasoning on hand (although should one feel so inclined to make such a large batch I would recommend storing it in smaller portions in the freezer).  For this batch, I used a tablespoon measurement, so that's how the recipe below is written.

I like to use this on whole wheat toast smeared with cream cheese, or top a batch of homemade crackers with a sprinkling of the mixture.  (Cheaters version:  Take saltines, brush with melted butter, sprinkle with everything seasoning.  Bake at 350 until light golden brown, 8-10 min, and serve immediately... not that you'll be able to restrain yourself.)  But what's even better than an everything bagel?  An everything bagel with veggie cream cheese!

This might just be my best invention ever.  Combining the ingredients of everything seasoning with those found in vegetable cream cheese results in a creamy, savory spread that can be used on crackers, toast, as a spread for wraps or sandwiches - oh, I could go on.  What do I call this miraculous invention?  ALL THE THINGS Cream Cheese. 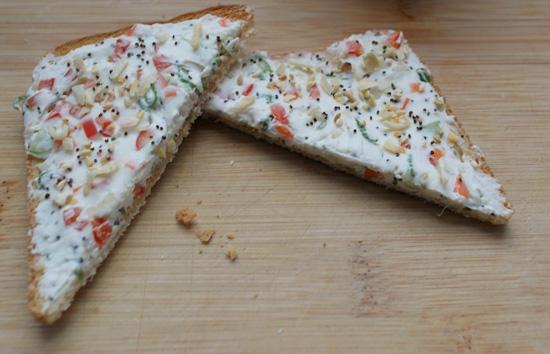 See that right there?  That's a super thin slice of toast, spread with All The Things Cream Cheese, and sprinkled with a touch more everything seasoning for good measure.  That, my friends, is pretty much perfection in my book.

Optional  (but encouraged):  Heat a small skillet over medium heat.  Add sesame seeds and toast, stirring often, until browned slightly and aromatic.  Transfer to a small bowl or jar and let cool completely.

Once sesame seeds have cooled, mix in the poppy seeds, garlic flakes, onion flakes, and sea salt.  I like to do this in a jar that I lid tightly and shake to combine, but you could also stir the mix together in a bowl.  Keep in an airtight container, and use within 2 months.

Suggested uses:  Topping for dinner rolls or crackers; sprinkle on a bagel or toast with cream cheese; toss popcorn with melted butter and then sprinkle with everything seasoning; make All The Things cream cheese (see below).

All The Things Cream Cheese
Makes about 1 1/3 c.

Pull the cream cheese or Neufchatel cheese out of the refrigerator to allow to soften.

Mix together the celery, red bell pepper, carrot, and salt in a cheesecloth lined strainer set over the sink or a bowl (a coffee filter will work in place of the cheesecloth if needed).  Let set 20-30 minutes - this will allow the salt to pull excess moisture from the vegetables and give the cream cheese time to soften.

After time has elapsed, squeeze out as much moisture as possible from the vegetable mixture.  Combine the cream cheese and vegetable mixture in a medium sized bowl.  Add the scallion or chives and the Everything seasoning, and mix well with a fork until everything is evenly incorporated.  Transfer to an airtight jar or bowl and store in the refrigerator for up to one week.