We Land on Our Feet 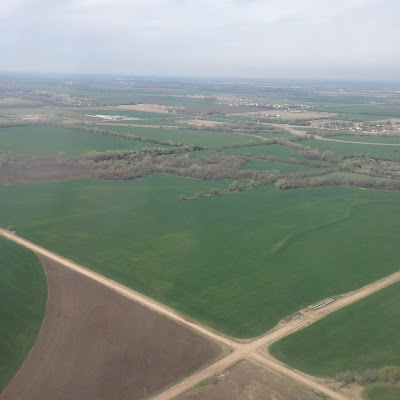 Hey.  It's me again, Margaret.  Where have I been?  Well, that's a long story, and not one that I want to drag over the coals or fan the flames.  I've been everywhere, and nowhere, and many places in between.

I love those bloggers that keep on keepin' on, no matter what happens.  As we've seen, I'm clearly not one of those people.  I blog in fits and starts.  My most recent absence of nearly a year was one in which I reached new realms of cooking exploration.  I could have shared, but it would have inevitably led to sharing other things.  Raw things.  Things that I keep neatly tucked into the folder that separates my personal and work/social/other life.  But I've grown a lot in those months, and here's what I've decided.


I just got home from a trip to Dodge City, KS.  The photo above is from my descent into Wichita, a brief stopover before driving to Dodge.  Look how VERDANT the land is!  Coming from snow here in Vermont, it was a welcome sight.  I spent a week working hard and playing hard with a group of people who have an insurmountable amount of knowledge.  We're toiling away trying to merge two systems into one, in the face of epic uncertainty as our company is being acquired.  There is a nervous tension flowing in a sub-current; ever present but never spoken.

But here's what I learned from all of these bright minds:  We will land on our feet.  We always do.  Throw us for a triple loop, we'll pick back up and keep on keepin' on.  Just like those bloggers I so admire.  We may do it quietly in the backdrop, but we'll be here, ready and willing to learn.

I'm not afraid of storms, for I'm learning how to sail my ship.
- Louisa May Alcott
Posted by Kelci at 3:38 PM