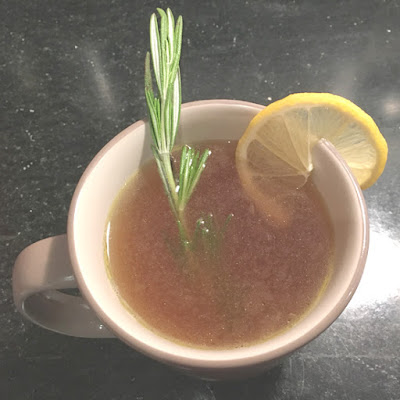 I don't usually have much in the way of fresh herbs in my fridge, but being only a week from Christmas dinner, I had several odds and ends - rosemary, thyme, sage, and fresh bay rounded out the two smallish heads of garlic that I found lurking in the back of my fridge.  I threw in a dried chili pepper (a serrano that my husband had procured from the farmers market this summer and dehydrated), a few peppercorns, and a bit of lemon juice to brighten the flavor.  The resulting broth soothed my irritated throat and warmed my sinuses.

So it looks like I'll be ringing in 2019 in a low-key way, hanging out in my new home, wearing my favorite lounge pants, and sipping broth until we pop a bottle of bubbly to ring in the new year.  Although truth be told, that's not too far off from my usual plans!

Slice one head of garlic in half to expose the cloves.  Peel the other head of garlic and crush lightly with the back of a knife.  Set a large saucepan over medium-low heat and add the olive oil and crushed garlic cloves.  Cook gently until light golden brown, 8-10 minutes.  (If you're home sick, this is a great opportunity to change into your favorite lounge pants and throw a comfortable blanket onto the couch.)

Once garlic is golden, add 2 quarts of water (that's 8 cups), halved garlic head, and herbs, along with any other seasonings you might want to add.  Increase the heat to high and bring to a boil; once at a boil, lower the heat to keep the broth at a bare simmer and let cook about 30 minutes or so.  (Sick day note:  Lounge on the couch with aforementioned comfortable blanket; catnap or throw on Netflix while the broth percolates away on the stove.)

Once the broth is reduced by about a 1/4 or so, taste and season to taste with salt and pepper. Strain the broth through cheesecloth or a fine mesh strainer into a large bowl, or remove the herbs and whatnot with a spider or slotted spoon.  Pour broth into a mug or bowl; optionally, garnish with herbs and/or lemon, and enjoy steaming hot.  (Sick day note:  Return to the couch with your mug of hot broth.  Breathe in the steam and sip slowly.  Keep the remaining broth warm on the stove to make refilling your mug quick and easy.)
Posted by Kelci at 5:36 PM